Person who lived in Phuket for a while told us that he visited and found it magical. From the drive to the park to running into wild elephants to the stay in tree houses they said that the place was just captivating.
The elephants sold me. 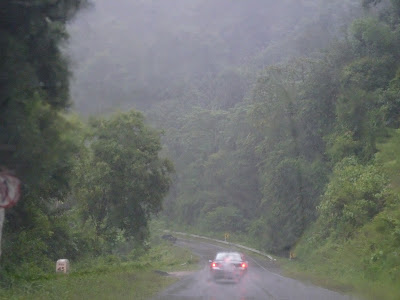 We really needed a break after all the stresses of engine reconstruction so we planed a short car trip to the park after which we were to move back to the boat. Well we seem to have an absolute knack for choosing a rainy weather even in the middle of the hottest time. We have done it a few times now and it is almost expected that when we go away it absolutely pours with rain in Phuket. This time was spot on too. Our drive to Khao Sok was bucketing wet.
We could hardly see the road at times not to mention elephants.

Khao Sok is part of the oldest rainforest in the world where snakes monkeys tigers bears boars deer gaurs tapirs reside besides the smaller animals.180 species of birds as well as worlds largest flower Rafflesia kerrii. It’s flowers can reach 80cm in diameter Finding our tree house accommodation for the night was not the easiest of tasks. We drove trough potholes and strange little roads and finally got to the end of the road where a wild and raging river met with maybe 600 meters rock.
﻿ ﻿﻿﻿﻿﻿﻿ ﻿﻿﻿﻿﻿What a sight and amongst this a tree house. It looked fantastic and it was. Romantic too. The bathroom was pretty much outdoors with cold water and a military army of mosquitoes just waiting. The bed was hard as a rock and everything in the room was rather damp. Basic was another word and all would have been perfect if it wasn’t for the rain. There are so many things to see here but the heavy rain was not the time to trek the jungle. We would have loved to venture into the jungle at night which we will have to do another time. It promises to be a rather a different and unexpected experience.

As soon as the sky turned darker in the evening the sounds started to build up and the night life in the jungle started. It was so incredibly loud that it was almost impossible to sleep. Magical of sorts! We have never been in a jungle so alive.
The rain stopped for maybe 2-3 hours in 3 days and we took this time to drive to stunning that was created by an enormous shale clay dam called Ratchaprapha
﻿﻿ ﻿﻿

Posted by ROBERT and TINKER from www.cognacsailing.com at 5:21:00 AM