11th June We were all more than ready for some rest by now. King River 11 degrees 49. 7 South and 133 degrees 31. 46 was the place to recuperate for 1 1/2 days.Looking forward to and all excited to visit a place of interest where old remains of settlement could be found we arrived in this truly spectacular place. We even thought that maybe a walk to the ruins could be a great possibility.Well a walk was not to be had.We all quickly realised that this was a crocodile haven with a capital C. After a quite evening and very noisy night with crocodiles making huge splashes for several hours we deserved a good sleep-in. In the morning we opened our eyes to lots and lots of red fly looking insects quickly anticipating severe pain from their bites. No bites no pain just good looking red insects. That was surely a great start to the day. Maybe even a good omen? "Night Moves" invited the whole group for a look around the river area.
Tess told us of the rotting crocodile smell they experienced at night as they slept outside in an open area (see picture) and the crocodiles moved under their bed. I could hear them brushing on the hull. The day was hot with lots of smoke in the air from the burning off-that is done frequently to prevent serious bush fires.We really enjoyed looking around as the area was truly beautiful.Even managed to catch a fish for dinner. Than we had a fish revenge - something very big came took the whole fishing rod all the fittings to the boat-the lot.No one had seen what it was and all suspected a big shark. Bad luck for the $ $400 rod. 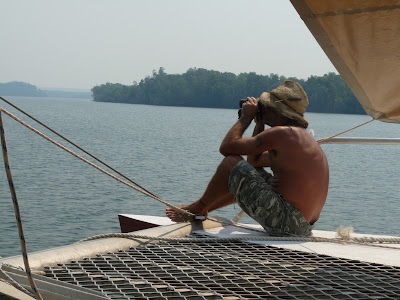 After taking some photos with crocodiles we all returned to our boats. I was getting ready for the feast on Cognac that night and was happily cooking my curry sauce for the fish when Robert told me not to throw onion peel outside (something that is normally OK to do) because there was police outside.Right like where I thought. Police in the middle of nowhere! Well they were there 2 boats with an Aboriginal elder Ralph who was concerned that we were fishing boats and he was making sure that proper payment was made to him as the land owner.It was quickly established that we were not fishing boats.We parted on very friendly terms where an invitation was extended to us to visit an Aboriginal settlement the following day. The day finished of with BBQ fish on Cognac which was a bit of a feast as all parties brought delicious foods.We had aromatic cous cous saffron rice curry and spicy sauces for the fish and a lots of laughter.

Posted by ROBERT and TINKER from www.cognacsailing.com at 9:45:00 AM