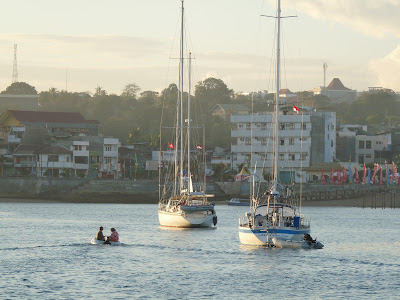 After many months of preparations we were ready to take off for Indonesia. The immigration process if very different to when leaving by boat almost resort like.


We left our safe anchorage after saying good-byes to friends we have made in Darwin and proceeded to the start line of the Sail Indonesia Rally. The Australian customs visited us unexpectedly with couple of very cuddly sniffer dogs and gave us an all OK to leave the shores of Australia on this unbelievably HOT day.

We believe to be the first to have crossed the line : )) The weather forecast was not the best with high wind warning.Some yachts decided to leave later.Robert was happy with the expected conditions.The crossing was at times uncomfortable and overall smooth - to the credit of Robert's meticulous attention to detail.We all participated in watches and arrived in Kupang safely after 3 days and 3 nights. A small electrical fault delayed us  somewhat.
What proceeded later was an unending paperwork with amazing amount of smiles to allow us entry to Indonesia.All so well organised. Robert was a bit of celebrity as apparently he looks like one of the actors from the movie "Renegade" so all the immigration officers wanted a picture with him.Funny really.


Our arrival day was a lot of things...full of anticipation,amazement at this place so full of hustle and bustle, meeting friends-everybody is your friend here,the scenery,the money - well hard to imagine that we paid 85 000 for dinner at the local market with the rooster watching our moves...all that and more.
We have all had an amazing time so far and will share it with you as often as we can. It might be more of a picture story from now on only I have lost all the pictures I have downloaded over 2 hours and than lost them as the power went off.Sorry. We might have to wait until we get to Bali.
Posted by ROBERT and TINKER from www.cognacsailing.com at 2:07:00 AM