Gove to Elizabeth Bay - delayed due to network coverage. 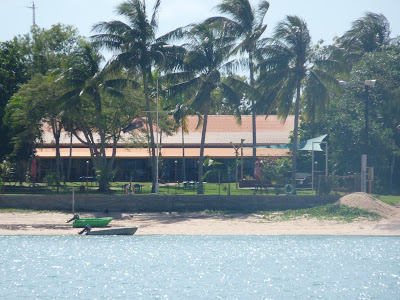 From 1st June - 5th June. What followed our arrival in Gove 12 degrees 13. 185 South and 136 degrees 41.66 East was  first quick assessment of the boat which seemed to be mostly ok. I was only able to lie on the deck for a while as the whole world seemed to be turning around me rather quickly while Robert came to the rescue with a meal of bacon-there is something about bacon in situations like this. We had another visit from the Australian customs which took photos of the newly arrived boats and asked more questions.

The next few days were spent recuperating laughing to tears at each other stories of the crossing and getting to know the place we were at-Northern Territory East Arnhem Land the the town of Nhulunbuy which was only a taxi ride away (our taxi driver was from Baghdad would you believe).Arnhem Land  and Nhulunbuy are one of Australia's last strongholds of traditional Aboriginal culture. We had to get a liquor license( so I now have a license attached to my driver's license) as this area has alcohol restrictions and Aboriginal people are only permitted to drink half strenght beer.There were a lot of them drinking every day at the sailing club which is the only club that serves beer and it serves other functions as well.
We heard some really funny stories from sailor friends.Golden Legend arrived 24 hours after us and Robert and Robbie from Night Moves solved their engine dilemma in the middle of nowhere really to the point that they were able to travel.

After several days of rest we were sort of ready for the next very short sail to Elizabeth Bay11 degrees 54.35 South 136 degrees 33.66 East . Guess what the sea was "angry" again. Some of us connected with their buckets again...oh well. Golden Legend was doing well for a while and at the end had to be towed to Elizabeth Bay in between pearl farms pearl farms.After a little more work on their engine the problem was found and by disposing of one part they were able to continue on with caution. With such exciting news some had a brilliant idea to take a visit to the beach because there were no crocodiles there and after seeing crocodile prints (BIG ones too...) made their way back to the boats.
Hey crocodiles are here definitely absolutely and undoubtedly...!!!!!!!!!!!!!

Posted by ROBERT and TINKER from www.cognacsailing.com at 6:07:00 AM