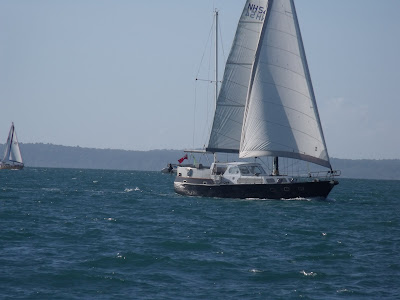 30th May - 1st June Gulf of Carpentaria so romantic and adventurous 340 nautical miles of sailing over two days nights and possibly another day- very exciting. The weather was promising 15-20 knots the first day and 20-25 knots the second day. We left Seisia early in the morning in a rather large convoy. We even pulled our main sail for this great journey and I managed to make a bit of a boo boo and will blame it on under-management LOL.

The day was absolutely fabulous everything you could possibly imagine from a travel brochure. The bluest water the sun the gentle waves and soothing breeze...well maybe much less than 15 knots and still with the help from the engine we managed 140 miles at the end of day one and were at the lead of the pack. With had plenty of time during the day. General idea was to get rest during so we were reasonably fresh at night. So we did. Robert read I took photos and deliberated life. We had a visit from the customs which is rather formal. You have to response to their call identify your boat tell them of your last port and next port. A French boat was asked of next port of call…their response” wherever the wind takes us” it was rather funny and not well received.
The night started well with me taking the first watch. This mean that I had to look out for any danger passing traffic etc etc…our safety depended on this being done. Sailing during the night is definitely different. Somehow the sun gives a sense of security certainty a certain grounding. It has never been so important before. When it got dark and we were in a middle of absolutely nowhere there was ultimately just us making sure we were safe. I was supposed to look around every 20 min and I think I was looking every 3 min waking Robert up as he slept in the cockpit to be near. We were travelling at 9 knots and getting tired. Both of us ended up on watch together. The winds started to strengthen and we heard of very strong rain from our friends on” Night Moves” and “Golden Legend”. From this point on the perfect picture from the travel brochure was no longer there and the real truth of what sailing can be emerged very quickly and very intensely. The winds increased to over 25 knots which is a lot in that sea with 4m waves and incredible swells. The exchanges on the radio were more of who is sea sick and unable to function any longer. With 1 ½ days and a night to go this was not comforting. We had all safety equipment on and were strapped to the boat with epurbs hanging of our life jackets. Conditions were worsening and the night was falling. Hmm not a comfortable feeling. Golden Legend had both crew sick Night moves had Tess permanently in “Tessi bucket”. I was focused on a single star of our flag. After trying most of the sail combinations to stable us we ended up with maybe 1/3 main and the engine on and were still being thrown around by now 40 knots gusts 5m waves and that swell. Golden legend had some sort of engine failure with oil all over the boat. We had a some non sea water on the floor and strange smell a bit like petrol and were concerned that we were leaking fuel stored for our dinghy. There was no way that Robert could go to check it was way to dangerous. It turned out to be white spirit bottle that broke in the kitchen. Situations like that don’t happen very often in life-really when one is extremely extremely tired concerned and thrown around.

Perceptions change-dramatically. At the beginning of night 2 we got an egg timer set it for 20 minutes to wake us up for a wach. The egg timer would fall on me or Robert. We had 11 hours of dark and 33 waches. I remember waking up from a short sleep looking out the window and shaking Robert because I could see a mountain ( and I definitely could)He pacified me and said that he saw trees too and that there is no mountain. Greg from Golden Legend felt a little better and was seeing islands. It sounds funny now and was very real to us. Golden Legend was now about 60 miles behind us and in trouble. Greg who was severely sick was contemplating confessing to any crime over the radio so that someone would come and get him. All in all we made it. Exhausted and really ready for some sleep. We have not eaten in 3 days and had one bottle of water between us. I guess that was one time when going to the toilet on all fours after holding for several hours was an incredible achievement. Robert wished that he had a camera. This was a leveling trip.

Don’t believe in travel brochures and if you are near Gulf of Carentaria FLY!!!!!!!!!!!(Golden Legend was reported missing and arrived 24 hours after us safe.)

Posted by ROBERT and TINKER from www.cognacsailing.com at 2:03:00 AM